The project was a beam/column framed hospital addition for the US Army, consisting of approximately 6,500 tons of structural steel for the composite floors and 1,350 tons of steel for the interstitial framing, with Bosworth Steel Erectors as a prime steel subcontractor.

The job had an extremely aggressive erection schedule, calling for a pace of erection 50 percent faster than the typical steel construction project.

The SAMMC project employed an Integrated Design-Bid-Builder (IDBB) contract, the first of its kind for the Army. IDBB is an acquisition methodology that allows the constructor to interface with the architect of record, the USACE, and end-user groups during the period from design development through 100 percent completion of each work package.

Designed for both moment frame and braced frame applications, SidePlate is ideally suited to protect structures against terrorism, seismic events, wind and other disasters through a single proven, cost-effective structural system.

As a federally-funded project, the job had stringent safety requirements, which were a perfect fit for our company’s culture of safety. USACE had 150 representatives onsite. Our firm performed more than 150,000 man hours on the five contracts without a single loss time incident.

The project also included a 5,000 space cast-in-place garage in which our company erected the stairs, rails, and pedestrian bridge, as well as a Central Energy Plant that Bosworth Steel erected.

The project included three separate renovation areas in the intensive care areas of the existing facility in which we reinforced the existing structure and added miscellaneous steel supports. The main frame of the hospital was erected using tower cranes. Crawler cranes were also used to assist in unload and shakeout along with some erection.

Job also had 700,000 SF of interstitial space hanging from the main frame steel. 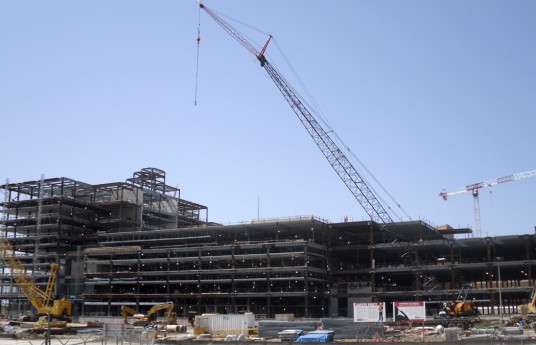